To illustrate the content of the International Programme, a summary of the previous trips is given below.

On the 19th of April, the international Programme 2019 departed for Taipei. When they arrived in Taipei, they were guided to the train in order to travel to the city center. The first thing that hit them when they left the train station was the humidity and the heat. Luckily, it was only a short walk to the hostel where they could refresh after the journey of 22 hours. The next two days the participants got the chance to be tourists. They started with an awesome Hop-on Hop-off Bus tour. The second day they travelled a bit further. They went to Taroko Gorge, a national park on the east side of Taiwan. In this national park, the participants made multiple hikes and enjoyed the beautiful nature. It was safe to say that during these two days they saw more of Taipei and its surroundings and they came in contact with the locals, which made it the perfect start of the trip. 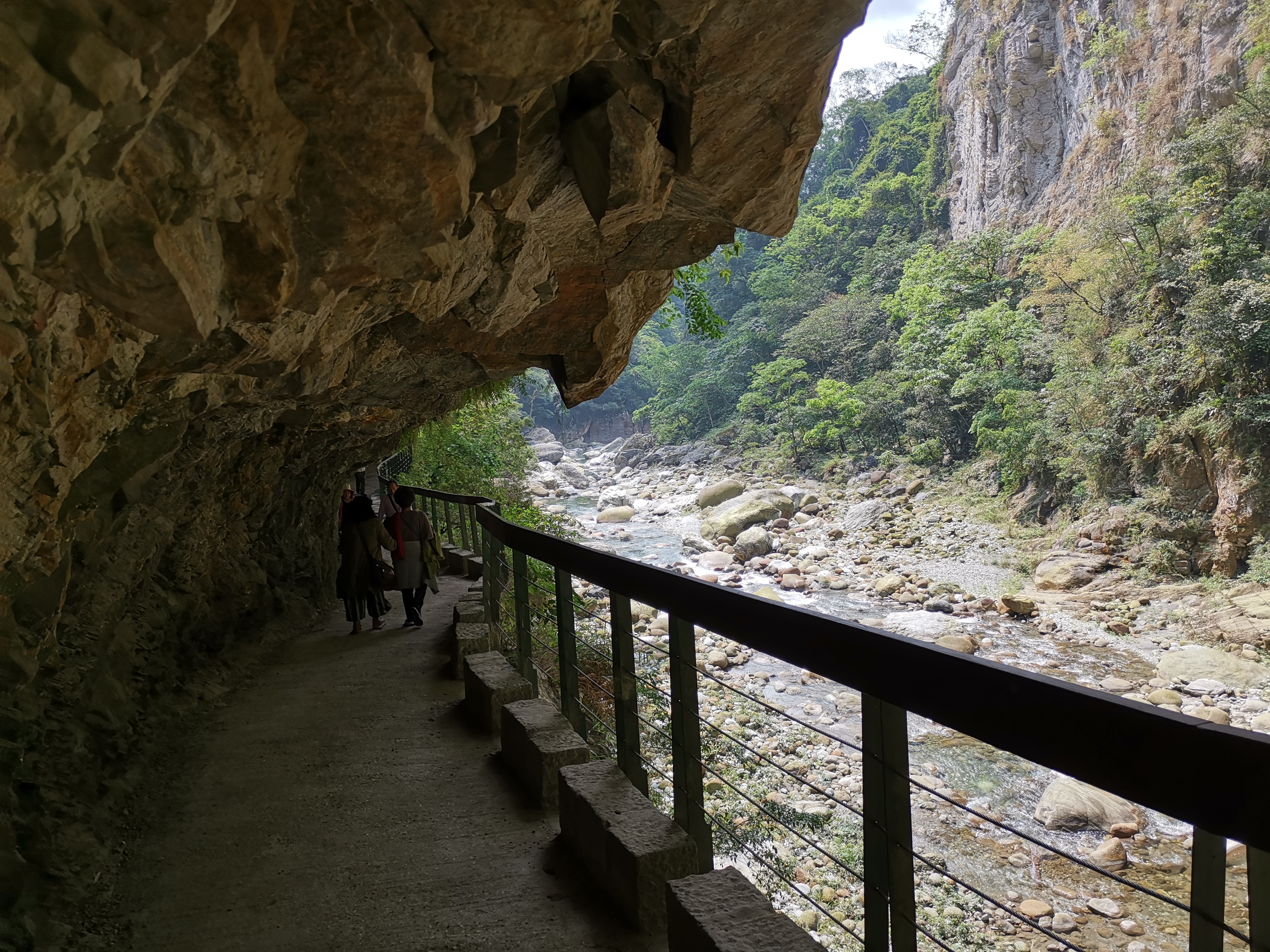 Then it was Monday and the second part of the trip started: the company visits. All participants dressed up and gathered their courage to defy the heat for their first presentation and contact with the Taiwanese business culture. After an inspiring talk it was already time to go to the next destination, which was the NTIO. Here they were also invited to join the Kings Day Party, which made this visit extra exciting. The next day started with a visit to Deloitte. They explained the ins and outs of working for Deloitte and especially the possibilities of going abroad when working for them. Then the group visited the National Taipei University and they attended presentations about the faculty of economics and the faculty of mathematics. The group concluded the day with a hike up Elephant Mountain to appreciate the beautiful skyline of Taipei and its city lights. 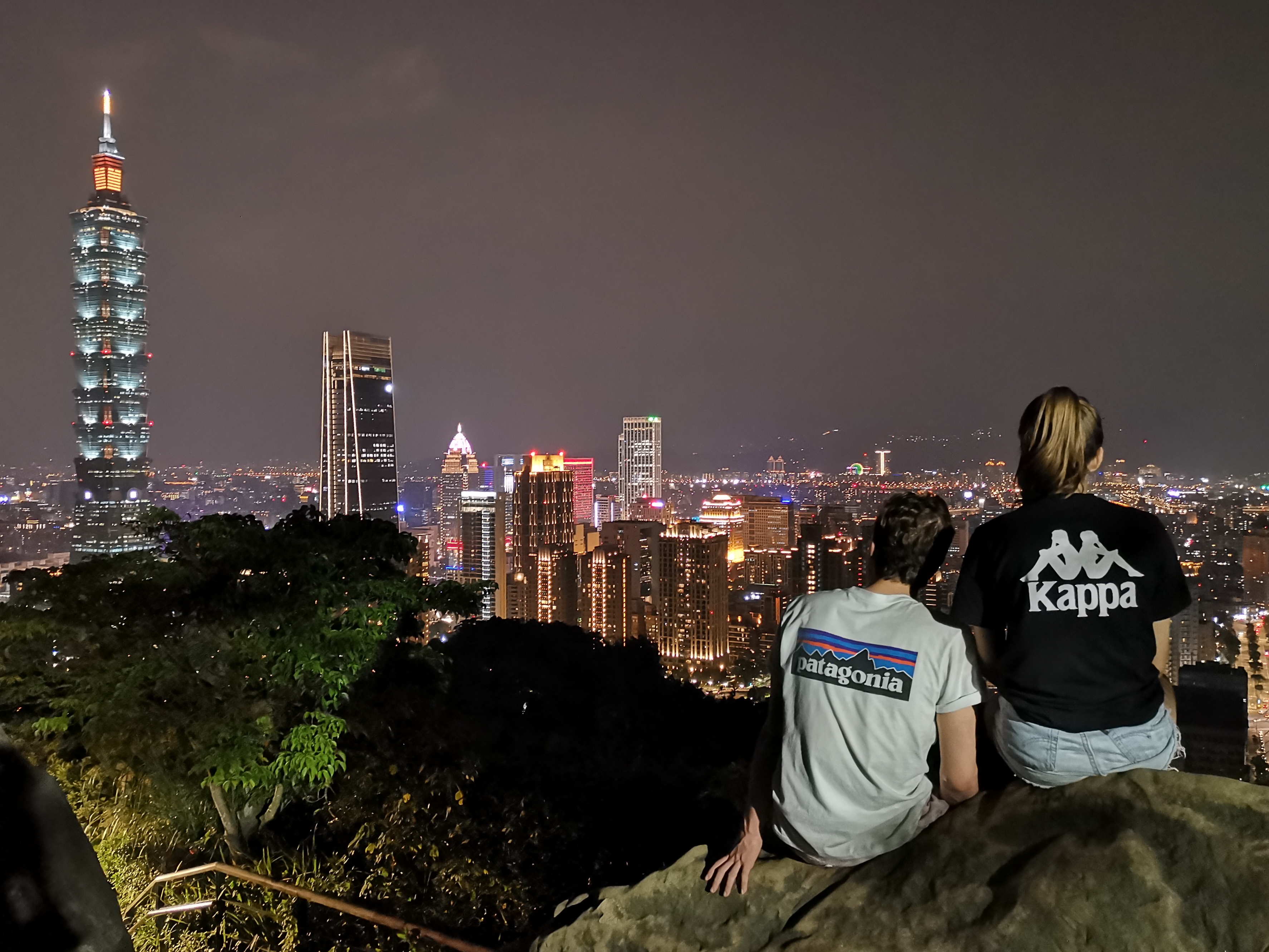 Wednesday came around and this meant that it was time for two more companies. First, the participants took the bus to the edge of Taipei, where they arrived at the bottom of a bunker-like building carved into a hill, Logistic Republic. After this visit, the bus arrived and took them to their next destination: Tata Consultancy Services. Here not only a company presentation was given, but also an inspirational speech on achieving success, which made it an outstanding visit. 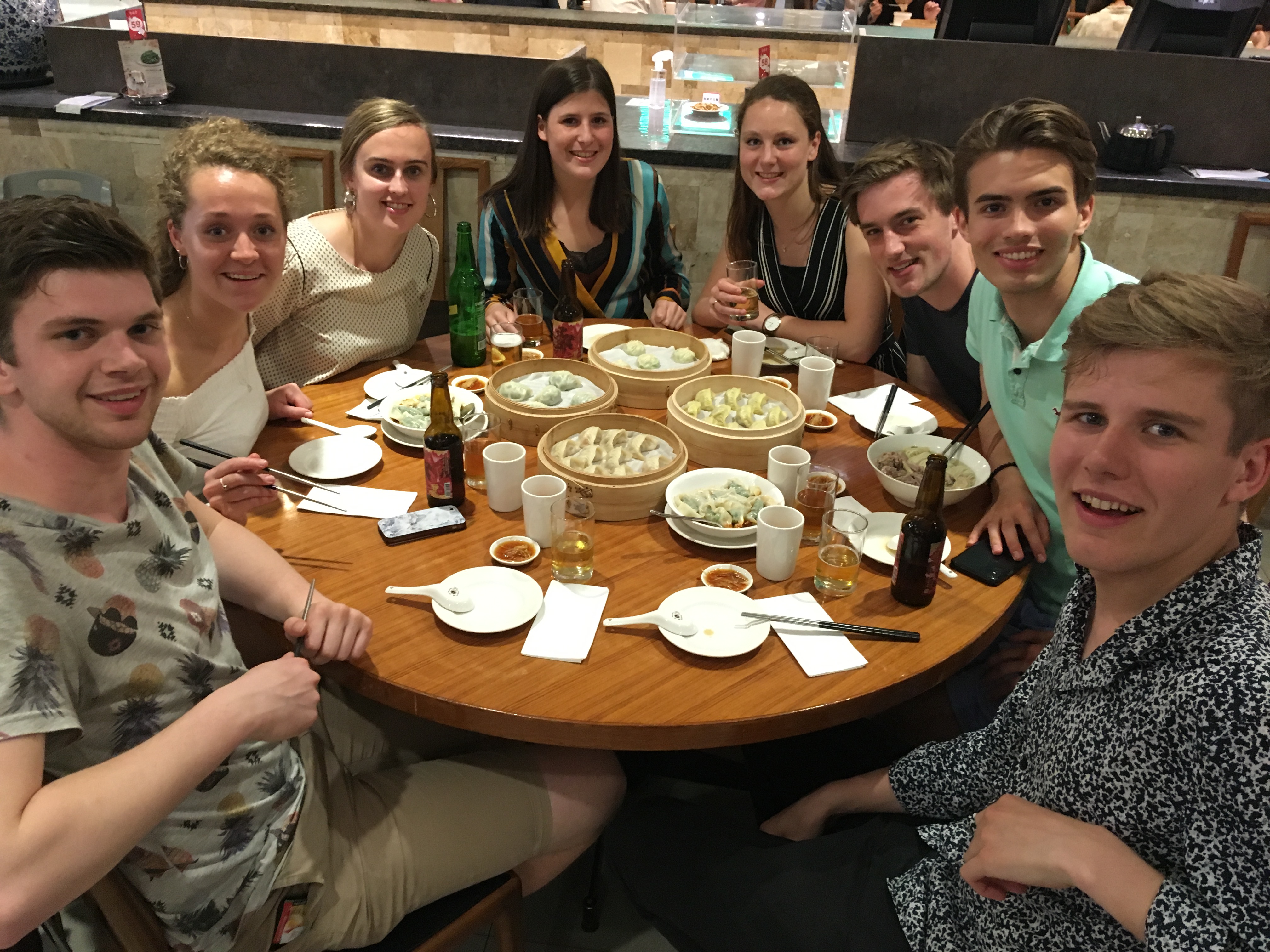 The next day was the last day of company visits, which started of with a presentation at the headquarters of the Taiwanese Stock Exchange. Then it was time for the last company: Willis Towers Watson. In their presentation, they talked the group through one of their business cases. During this visit, the participants not only received a great presentation. They were also given one of the signature Taiwanese desserts, which they, of course, enjoyed very much!

Then the evening kicked in, which meant that it was time for the Kings Day Party with the NTIO. However, they had not been told that the dress code was pretty formal. The participants certainly stood out in the crowd in their orange outfits, but they had a lot of fun no matter what.
Fortunately, no company visits were scheduled the next day, it was time for a relaxing activity: a beach day. This night the group visited the TaipeiEYE to witness one of the most fascinating yet incomprehensible shows they had ever seen, Monkey business in the sea palace.
The next day they took a gondola into the hills of Taipei, where they visited multiple attractions. After dinner they went on to the next location of the evening, a karaoke bar, an awesome experience to end their nights in Taipei.

The International Programme 2018 went to Beijing. The group of 20 students headed off to Beijing on the 18th of May and arrived back at Schiphol on the 28th. The focus of the IP 2018 was on Chinese business culture. China has become a major global player and its GDP growth rate is still at an impressive 6.8% per year. Although Shanghai is the financial capital of China, Beijing has a lot to offer for econometricians! During the 9 days in Beijing the participants, therefore, visited some companies, which differ greatly in their specialties and shine a light on how our study skills can be applied abroad. The group visited 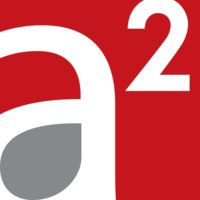 Applysquare, a ‘global, data-driven’ company that specializes in academic education and research, and

1421 Consulting Group, a consultancy company for western companies that are interested in starting a branch in China. 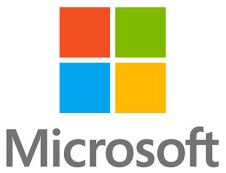 The third company was Microsoft, where they visited the SMRA Theory Group, which focuses on enhancing computer science applied to game theory, social networks, optimization and statistical physics. Afterward, they also visited

Willis Towers Watson, a global operating consultant broker, and solutions provider which you are likely to be more familiar with. The final company of the visit was the Bank of Beijing, the bank that provides various banking products and services to individual and corporate clients in China, Hong Kong, and the Netherlands.

Of course, they not only visited Chinese conference rooms; there was also lots of time to explore Beijing’s beautiful attractions. They visited the Northern Capital, where they saw a glimpse of the former seat of Imperial Chinese Dragon Throne, the Ming dynasty and the end of the Qing dynasty, all at the Forbidden City. They also visited the iconic Tiananmen Square, the largest square of the world surrounded by Tiananmen (Gate of Heaven Peace), the Great Hall of the People, the National Museum of China and the meeting place for national people’s congress. Obviously there were many more cultural highlights, a visit to the Great Wall was even included in the program. It was an amazing experience and ss the Chinese like to say: ‘机不可失，时不再来’ (Opportunity knocks at the door only once)

The participants to Bogotá left on Thursday the 18th of May. The flight was long, but still the participants were full of energy and enthousiasm when they arrived (local time) Friday morning. After a quick stop at the hostel to refresh, the group took a taxi to the historic centre of Bogotá and walked around before having their first Colombian lunch. Later in the afternoon all the students went to the Monserrate, a high mountain top visible from every street in Bogotá, to watch the sunset. The weekend was similar to the Friday: the students got to know Bogotá and its Colombian culture. They did so by a graffiti tour and a food tour on Saterday. On Sunday the group splitted and some went to explore more parts of the city, while others went rafting.

Monday afternoon the first company visit was planned. The group went to the Embassy and the Holland House, an organisation trying to help the cooperation of Colombian and Dutch companies settling in both countries. Every evening dinner plans were free, but most of the time the group sticked together, just like this evening. Tuesday a long day full of presentations, a tour and a case was planned at Fondo Nacional de Garantias (FNG), which is a government fund.

On Wednesday the University was visited. The group worked hard on a case and had a traditional lunch at the Campus. The afternoon was planned as leisure time, in which some watched the Europe League Final of Ajax against Manchester United in a pub with only Dutch people! The next day the students had the morning off, which resulted in an unforgettable evening on Wednesday (of course). Thursday afternoon the Bolsa de Valores de Colombia, the stock exchange, was visited. Here multiple presentations and an interesting tour were given. Friday was the last day of company visits, which all took place at the University. In the morning the group worked on a case of SAS, while in the afternoon a presentation and case were provided by CAOBA, a data center affiliated with the university and multiple multinationals, such as SAS. The last day, Saturday, all the participants went to a national park to explore some of Colombia's beautiful nature.

On Friday April 29, the group of 20 VESTING Members took the train to Schiphol early in the morning. After hours of traveling we arrived in Mumbai very early on Saturday (local time). Luckily, we were all able to enter India with our visa. As soon as we stepped outside the airport, we all felt the extreme heat. A bus was waiting for us to bring us to our hotel and luckily it had air-conditioning! After dropping our luggage and changing into some summer clothes, it was time to explore Mumbai. We spent the day walking around. We saw some locals playing cricket, and visited the Courthouse and a museum. But what we all remember the most is the number of people asking to take a picture with us. At the beginning, it seemed cute, until we arrived at the Gateway of India and there was no escaping it. Quite special, we shall say. On Sunday, we woke up around 5:00h to go and explore Mumbai by bike. Early in the morning it wasn’t too hot yet, and there wasn’t too much traffic yet. The latter was very important, because a 3-lane road is seen in Mumbai as a 5-lane road…

On Monday afternoon, the first company visit was planned. Therefore, in the morning we had time to visit the biggest outdoor laundry room, of Mumbai/India/the world (not too sure what is correct). The company we visited on Monday was Canara Robeco, where we listened to a presentation about how India is doing economically. Tuesday, we had to wake up early again for our visit to Apollo Logistics Solutions, a company just outside Mumbai. Here we saw how containers are filled by hard working Indians. At the end of the day we went to an exposition of the Dutch photographer Martin Roemers for which we were invited via the consulate. On Wednesday, we took the bus to the slums to visit AMIL Microfinance. This was definitely the most Indian office we have seen during the trip: super small, plastic chairs, no air-conditioning, very informal. In the afternoon, we visited the Reserve Bank of India (RBI) which was quite the opposite on the morning visit: huge office, big conference room, working air-conditioning, very formal! On Thursday, we made a visit to the IIT Bombay (an university). We were welcomed by a group of Indian students and a professor of the IIT School of Management. After the interactive presentation of the professor, some students gave us a tour around the big campus. In the afternoon, it was time to relax and to cool down, it was time to take a dive into a swimming pool. Friday, we had our last company visits. We started the day by visiting Deloitte in Mumbai. After Deloitte, we were welcomed by the consulate to hear about the Aegon Life and we had dinner at the home of the consul. It was definitely a night to remember!

Before leaving on Monday the 9th of May, we spent the weekend doing cultural and fun things! We visited Dharavi, the biggest slum of Asia, had the ultimate Indian experience by taking the train, and some people were even invited to an Indian wedding but unfortunately couldn’t go. We also visited the Gateway of India, for where we took a boat to visited Elphanta Island.

It was most definitely a trip to remember!

Back to top
Cancel